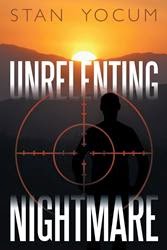 
Stuart Garrison, a brilliant virtual reality software developer, has his company poised on the threshold of industry dominance with the release of his newest virtual reality system--Next World. Among his competitors is Preston McBraid, the cutthroat CEO of a rival company. McBraid realizes that if he does not own Next World, his company is bound to lose its premier position atop the computer industry.Driven by desperation and greed, McBraid hires the notorious Nomed, a highly sought-after assassin who commands millions to kill a target. The FBI learns of the assassination plot and intervenes to protect Stuart. He in turn quickly augments the FBI team, hiring two security specialists as additional defense: a monster of a man, nicknamed Superman--and Alex Nichols, an expert in the field of security. Stuart clings desperately to the hope that he can make it though the onslaught of Nomed's assassination attempts. If he does, his next ingenious virtual reality product--Mind Games--will blow the world away with its originality and staggering mass appeal, and catapult Stuart to the top of the computer industry as its reigning czar, and make him a billionaire many times over.In this gripping suspense thriller, the wannabe czar of the computer industry is unwittingly catapulted into a deadly cat-and-mouse game against the infamous Nomed, and only time will tell who is clever enough to survive.


I must confess that I have not read a massive amount of thrillers and I am often scared off books by synopsis' that include vocabulary associated with the business world. (As a teenage girl the topic can be slightly daunting) However, I found I highly enjoyed Unrelenting Nightmare for many reasons.

One thing I particularly enjoyed about the book was the intelligent story line. The plot was detailed and well thought through, taking unexpected turns now and again, to ensure that it wasn't predictable. This not only made the reading experience a lot more exciting but it really gripped me, as the reader and made me plead with myself for one more chapter (Which, inevitably turned quickly into 2 or 3 more...ore maybe 10...).

The Characters was another factor that lead to making this book such a great read. The 'goodies' were kick-ass and awesome and the 'baddy' was devious and truly malicious. All the characters also seemed to have more than one side to them and sometimes came across a lot different than the first impression that was gained upon first being introduced to them. This was an aspect I liked, as, like the plot it kept you guessing.

The genre of the book is not one that I usually read a lot of, but I really enjoyed this book and aspects that before have been a big unknown to me when reading, such as assassination and software developing. I was a bit worried at first that I wouldn't understand the story if too many unfamiliar terms cropped up, especially in the 'sciencey' parts, however, I found that this really wasn't the case and the book was easy to understand and I was intrigued by the new and astounding ideas that Stan Yocum introduced through his book.

My only pieces of criticism would be that sometimes I wasn't as hooked to the story as I would have liked to have been. In some chapters I craved more after it was finished, but in others I sometimes didn't really feel that interested. I found this especially to be the case in the business parts of the story. I also found that although the book had a great fast pace, especially towards the end, the book could go from action packed, to a bit hard to get through.

This is not to say that I didn't enjoy the book. I seriously thought it was excellent! I especially loved how clever the ending was and the fates of all the different characters.

I highly recommend this book to any lovers of action, detective work and even science fiction lovers!