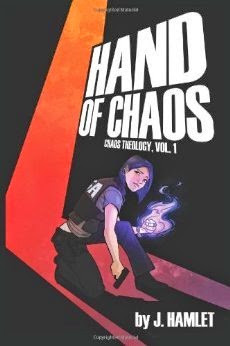 
Exhausted, cynical, and confused, Anna is always there to report for duty. She's part of a clandestine government team that defends the nation against supernatural terrorism-which, in all honesty, is enough to drive anyone to drink. Toss in a fear of intimacy with a desire to have friends and lovers like a normal person and, well, Anna is a walking, talking contradiction, albeit one wrapped in a special agent with arcane, magical powers of her own. And at five-thirty in the morning with a zombie-infested apartment building in the heart of Washington, DC, you've got the makings of the worst morning...

I have to say that I don't think I have ever come across a book quite like this one. Not only was the plot and mixture of genres new and exciting, but the characters were very different to ones I have encountered before. This was really refreshing and made me enjoy the book very much indeed.

One of the things I loved about the book was how action-packed it was. The synopsis and front cover themselves promise excitement, action and fantasy. I have to say, the content delivered. Something was always happening, so there was no chance of getting bored and as the reader, I was constantly on edge, awaiting the next thing to happen.

The characters were great. I have never encountered a main character quite like Anna but I really enjoyed how independent and...well... badass she was! For so many female heroins, a man is essential in their day-to-day life and successes. This was certainly no the case here and I loved it! I also loved how some of the characters, although older, were equally as cool and inspiring as Anna was and I felt that each of them had a lesson we could all learn from.

The plot in the book was great, although I felt it could have been slightly more gripping. It all slid into place really nicely and I liked how some chapters jumped between characters. There also was a bit of romance which I found a slight yet pleasant interlude between the action and gore.

The aspects of fantasy in the book were obviously extremely well researched as there were fantastical beasts and objects which I had never stumbled across before, and exciting experience for an avid reader of fantasy! The information and knowledge given was astounding.

If I had to criticise the book I ave to say that I did struggle a bit when huge long words were used. I would often look the words up and because they were names of things dwelling in the realm of fantasy, they would have an unclear definition. Because of these daunting long words, I sometimes found my concentration ebbing and I think this is why I struggled to get entirely gripped. This may, however, just be because as a teenager, my vocabulary is more limited.

Overall, the book was a great book and I thoroughly enjoyed reading it and taking part in the book tour. I really loved the new ideas I found in this book and the unique concepts of new elements, divine beings and ultra - badass characters!