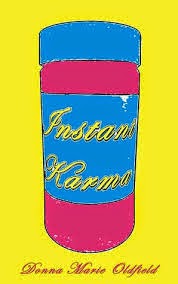 
Do you believe in karma? Materialistic, selfish estate agent Siena Robinson doesn’t – until she hits a disastrous run of bad luck that makes her wonder if she has brought it upon herself.

In Instant Karma, Siena moves to the quiet village of Fenville, where the locals are opposing a development that will see a beloved hall and library replaced by new flats and shops. What her neighbours don’t know is that she is one of the developers and stands to make millions from the deal.

But then Siena discovers that her high-school sweetheart, Aiden, is leading the protest and she finds herself acting as a double agent who is torn between her neighbours’ plight and making lots of money.

Will Siena betray her new friends and let greed ruin a second chance with Aiden? And will she ever find out who or what is behind her run of bad karma?


I've been reading a lot of fantasy at the moment so it was really nice to be offered to read a genuinely good contemporary book. Instant Karma was exciting with true morals and complex characters.

Firstly I'd like to talk about the cover... I don't know about everyone else but bright coloured covers seem to be all the rage. Personally I'm loving it! Instant karma's cover immediately catches your eye... It's simple yet inescapably unmissable!

Admittedly, it wasn't particularily gripping from the first page but there were still enough subtle hints and hooks to prevent me from putting it down and to keep telling myself 'one more chapter.' Which is always inevitably the biggest lie I tell myself! By the end I craved more and I devoured it's contents in a day!

One thing that bugged me at the beginning is that the main character wasn't particularily relatable. Siena is rude and selfish and usually, one likes a main character that is inspiring and one can look up to them... This wasn't really the case here but as the book went on I gained respect for certain characters and even some for Siena. I found I kept trying to come up with excuses for Siena and although she was really unlikeable, sometimes you had like snippets of insight into her former 'good' self and it gave me enough hope to believe maybe it would turn out ok.

The plot was really good and I got that bitter-sweet twist in my stomach as you were put in Siena's shoes and were completely torn between love and money. Although this is infuriating it made it even more gripping and exciting. I thought the romance that played into the book was really sweet and made me squeal a little at times and scream in frustration at other times which, in my opinion is just how a book should be.

There was a major plot twist, which I really didn't see coming! Wow! But I thought it was good...maybe a little too unexpected and unrealistic but none the less, it kept you on your toes and open to new ideas!

I thought the book had good, clear morals and it is unusual to find a book with such a strongly communicated message, I thought this gave the book purpose, which I really enjoyed.

The writing style was pretty good, it suited the style of the book and it was laid out very clear and quite simply so it was easy to follow and you didn't have to try hard to push through the text. While this made it a light easy read, it didn't make it compelling or give my brain a lot of work to do. However, having said this I think that the style actually really suited the book and it was nice to read something so easy-going!

All in all, the book was really very good! I'm extremely grateful for Donna Marie Oldfield for sending this little gem my way and I seriously recommend this book to anyone who is looking for a light, gripping contemporary read!