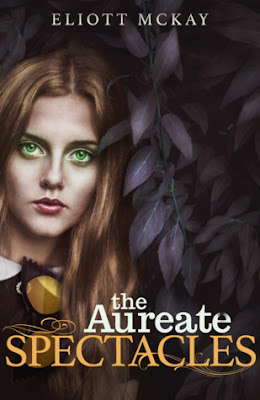 
Would you sacrifice your people for the man you love?

Michaela was a seemingly normal high school senior, hiding behind a pair of hideous spectacles which masked her true identity. When she’s abducted by an intriguing werewolf, she learns that her father was a powerful vampire, and she has been chosen to protect his city from her predatory kind. As the situation grows dire, the fate of the city rests in her hands, and she must choose between peace for her people or the man she's growing to love.

This book is possibly one of the hardest I have had to review simply because I really enjoyed it, however, it was overcast by one thing that by the end made it harder to get through...I shall try to explain a little more eloquently!

So firstly, I loved the writing style. It was fluent and elegant with very few minor errors. Michaela's thoughts were expressed in a conversational way that meant she was more relatable to a younger audience, however in places the writing was also formal and rather lovely.

The characters were all described well and enough was left to the imagination to make them special to you. I thought the real sense of family ties and inheritance, a theme of the story, was addressed really well and links between generations were made keeping you awake and getting excited along with Michaela over little connections that were pointed out (particularly between her and her father).

The ideas and concepts were pretty darn good. It had a classic romance, but it was slightly different to any of the similar books I've read. I liked the fantasy world very much and would love to have been given more insight into its geography and how it interacts with our world, with maybe a map insert in the book.

You may have noticed that thus far I have been more restrained with my reviewing than usual and haven't given a lot of detail. I felt before going on I should explain why. The main overriding problem I mentioned at the beginning of this review was the confusion I felt. Unusually, I found the book got worse and worse as it went along. Don't get me wrong, it wasn't a disaster! Simply, as the plot thickened and more excitement happened I found myself going back and thinking maybe I had skipped out a chapter or something. Strong relationships between characters seemed to spring up overnight for starters. I found this meant I struggled to feel sad or happy or anything really when things happened to characters, which made it harder to be hooked and get attached. The plot also got very confusing. I don't consider myself to be a stupid person or to struggle particularly with complex plots, however, I got seriously confused in places and felt like it was assumed I knew what certain things were in Michaela's world, where I had no clue. Everything that shouldn't have come as a surprise did and everything that should've been a surprise or a dun dun dunnnnn moment sort of was obvious.

This may sound a bit like a rant and not make much sense to many of you, yet I assure you IT WAS NOT BAD. It's so hard to explain how I feel about it, I think the best way I can come up with to describe it is I feel like if someone verbally explained the plot to me I would love it and 100% get it, but it was almost as if Mckay was so excited in writing such a great story, they forgot the readers didn't have the same knowledge level about the book to keep up.

I feel like if you get this book, it is a winner and I would definitely recommend anyone giving it a go because if it hits the spot, it is worth it. For me, however, I was too confused to bask in its really quite splendidly written storyline.