Book Review | I was a Bitch 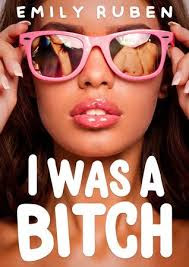 Title: I was a Bitch


What if you woke up having forgotten the last two years of your life?After a horrific accident Lacey Jones has to try piece together her shattered past. With no memory of the previous two years she finds herself in a relationship with a man she doesn’t know, and with a reputation for being the Queen Bitch of High-School. She decides to keep the secret of her memory loss until she can figure out what happened in these two years she lost, trusting only the mysterious and sexy Finn to help her, but will she continue being that bitch or will she decide to rewrite her story?

Sometimes I find reviewing actually really difficult. Some books I am sent are admittedly really hard to get into and some I even struggle to get to the end. However, this was probably one of the easiest books I've ever had to read and review, just because I was completely and utterly hooked from the moment I unboxed it.

I think many people would underestimate this book for its cover and title being seemingly very orientated towards teenage girls. However, it has a lot more waiting inside - 500 pages more in fact. Despite its length reading this book didn't seem like a mammoth job in the slightest, which I think shows how good it is. For me I was grabbed by the title as it's short and snappy and the word 'bitch' certainly grabs ones' attention! (This might of course be because I am a teenage girl)

Something I really enjoyed whilst reading was the writing style. It was very chatty and informal, which really suited the book and was engaging as it made you feel like Lacey was a friend and therefore more real. I especially loved how Lacey expresses the feeling of 'fangirling' and her excited outbursts because not only is this something I think many people can relate to (particularly teenage girls) but I found my excitement was reflected by Lacey's thoughts and vice versa.

The plot was fast paced and got me completely hooked. There were a few mysteries tied into the main plot that threaded in really well and although a few outcomes were slightly predictable, there was enough to keep you guessing. There were a few scenes I felt were not needed and dragged the book out a bit. It was almost as if there was so much to write about all the characters, memories and emotions it sometimes became a little repetitive. That being said, I wanted to keep reading so badly any extra information I could cram in about the characters was pretty welcome, so this didn't pose too big a problem.

The characters were really good mainly because they were so accurate to what (sadly in many cases) teens are like. Finn was perfect. He had just enough vulnerability and sadness in his life to make him real and relatable, yet he still managed to be a character one could really aspire to be because of his attitude towards others and his utter perfectness. (Sorry, I'm obsessed). I also thought Lacey was a tremendously relatable and funny character. I found myself laughing along with her, sympathising with her and wanting to be her to an extent. At times I found her slightly annoying...that being said I think that is the desired effect as it helps show that she's just a normal teen in many ways trying to find who she is and maybe the part of her I didn't like as much shone through to remind the reader at times she must feel like two different people in her situation.

The reason I didn't give this review 5 stars was because although I am a total sucker for romance and I found myself internally squealing at some of the sweet things that happened, I also had a few moments where I almost inwardly groaned at the cheesiness. A dash of cheesiness is fine, but sometimes the romance I thought was too intense for teenagers. However, this could be a poor judgement seeing as this review is coming from a teenager who is very critical of any romance that is non-fictional, in a setting where romance and chivalry is just about dead.

The morals of the story were fantastic. They send a really good message to teenagers, especially younger ones that you should be who you want to be and never bow to the gigantic pressures telling you otherwise. It's also never too late to turn the tables. I think it is a book everyone can take something from, whether you were a bitch, are a bitch or will never be one.