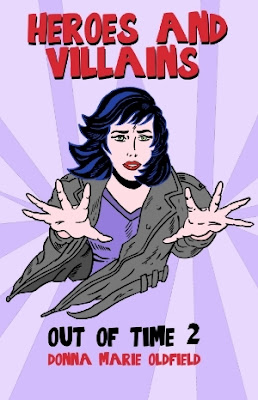 Series: The sequel to out of time

Teenage superhero Scarlett Shortt is stuck in an alternate timeline that's growing more dystopian by the minute, and now it looks like her days could be numbered.
Three months have passed since Out of Time #1 and Scarlett, Dylan and their friends are living life on the run after being forced out of their cosy London house.
They flee to Scarlett's home city of Manchester, which has been run into the ground under evil Prime Minister Goulden's regime. Much of the area has been destroyed and things are set to get even worse thanks to the PM's plans for cruel weapons, segregation and war.
As if things aren't bleak enough, their new friend, Mason, has a premonition that Scarlett will be killed and millions will die in a separate attack. Then there's the added complication of a deadly new foe, The Echidna, and a team of supervillains that features some very familiar faces.
Can the young superheroes stop millions of innocent people from dying? How will Scarlett deal with predictions of her death and will moralistic leader Dylan toughen up and accept that the rules have changed in this harsh new world?

I have to say that having been so hooked on the first book Out of Time, I was somewhat disappointed with this sequel. I always find it hard to write reviews where the books don’t quite match up to my expectations, so please, (as usual) bear with me.

Don’t get me wrong under no circumstances did I dislike this book. But it’s hard not to compare it to the first one.

For starters, I thought that the plot seemed a little less thought out and more disjunctive than in the first book. It seemed to leap from battle to battle and argument to argument with not much substance in between. It was fairly easy to follow, which was a good constant that remained from Out of time; however, it made the battles seem less dramatic and exciting.

Another thing I found slightly odd was that the romance that had so many sparks in the first book sort of seemed to fizzle out in the second. Don’t get me wrong; it was still there, which was nice. There just seemed to be no chemistry making it slightly unexciting.

The characters were still fabulous. I loved them all and I thought they did seem to develop and change more in this book, which was great. The Echidna was an especially interesting and well-built character and I thought that the problems faced again were relatable and made you want to be the characters, a vital element which kept the book alive.

The thing I liked the least is hard to explain, but I’ll do my best. I didn’t like how each character was introduced and threaded into the story. As my old English teacher would’ve said : ‘There was a lot of telling not showing”. Rather than letting the reader remember the characters by showing the reader their power or some aspect of their character that the reader would remember them by from Out of time, It seemed that we were just told the characters name and their power, which after a while (as there are so many characters) got a bit repetitive. I don’t know if any of that made sense but hopefully if you take the time to read the book, you will understand my meaning.

Having said this about the book I actually do think it’s worth a read. I’d like you to remember that 3 stars aren’t bad. 2.5 is halfway to 5, meaning this book is above average and I think it is worth reading it as I still wanted to find out what happened to all the characters and if the situation had been resolved.